Audio Frequency Shift Keying - usually carried out by sending audio signals to FM modulated channel. On AFSK modulation, the data bits control the produced audio signals which will then be driven one way or another the actual RF modulator.

This is different from FSK where data bits are directly driving the RF modulator. (Single bits or groups of bits called 'symbols'.)

The 'AFSK is most common modulation on ham radio's packet radio.

The deviation at NBFM modulator is set at +- 3 kHz, when it is receiving each tone. This leads to RF-spectrum at -60 dBc level to be a bit under 20 kHz wide, and its fits nicely on a channel.

There are separate articles on AX.25 (finnish), and HDLC (finnish) bit synchronous framing method. On packet radio the transmission is not "payload bit as is to modem", instead they need to be encoded using NRZI in order to achieve limited runs of same bit, and change to re-synchronize bit edge clock.

A notable thing on modulation is that both 1200 Hz and 2200 Hz signals must be continuous from one tone to other at bit transitions.

Because HDLC will never end more than 6 consequtive 1 bits, we can define a link modulation which can recover bit edge clock even without demodulator reporting any such clocks.

Simple method for this is known as Non-Return-to-Zero-Inverted, at which HDLC zero bits cause modulated signal to flip in between 'mark' and 'space' modulation symbols. HDLC one bits do not do this flipping. By knowing the transmission speed roughly, and knowing that modulation transition is at least every 7 bits, it is quite simple to keep synchronized to bit edges.

Because HDLC zero bits cause modulation change, a very good clock synchronization preamble is bitstream of zeroes (for 16-32 bits), which after NRZI do produce alternating mark and space modulation symbols. Even longer preambles are sometimes used to let power saving receivers to wake up and catch a frame.

Following circuitry can be used to convert HDLC to NRZI, and reverse: 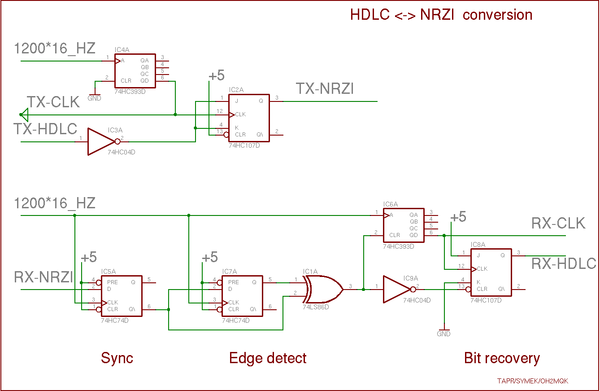